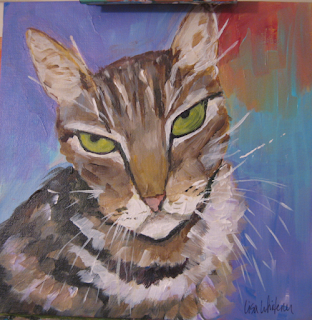 Norman a/k/a Normal a/k/a Norm a/k/a Normie
1999 - 4/11/2011
Well, dang it, here come the tears again.  I thought I was finished.  Please meet Norm.  We adopted him from the Humane Society in October, 1999.  He was not one of the crazy little kitties, crying and  begging for attention.  He merely sat there gently placing his paw against the cage saying "Please get me out of here.  These people are nuts."  So we paid the $40.00 and took him home where he enjoyed quite the life of doing pretty much whatever he pleased.   Over the course of the last several years many stray cats and dogs have come and gone - mostly come.  Norm reluctantly put up with them, although everyone knew he was king.  He was not a lap cat, but on his terms, he loved having his head and ears rubbed and purred so loud that you couldn't carry on a conversation.
He did not have a mean bone in his body, but he did have attitude.  If he wanted food and one of the other cats was eating, he didn't bother trying to compete.  He would simply look at them, and if that didn't work, he would place his paw into the bowl and drag it over to him.  The other cats would look at him in amazement.
He passed away on Monday from congestive heart failure.  He was ready to go.  He waited until my husband took him away from the other animals and people, looked at him, meowed, purred and gently drifted off to kitty heaven.  I had given him everything I could - good food, a lot of space, and a lot of love and attention.  He slept with me a few nights before he died.  He had trouble sleeping because of his labored breathing, so he purred and needed to be rubbed for hours, which I eagerly obliged because I knew the end was near.
We still have 5 cats, none of which are Normie.  I could not attempt this painting for a few days, but I felt like I just had to do it.  When I did, Normie and I talked our way through it.  I think he was happy with the result although he's not sure why I added lavender to him.
At the top of my stairs is a large print of  The Favorite Cat,  the famous lithograph done in the 1800's by Nathaniel Currier.  I plan to to replace it with the real Favorite Cat in the very near future.  I miss you Normie.
Posted by Lisa F Rogers at 11:34 AM