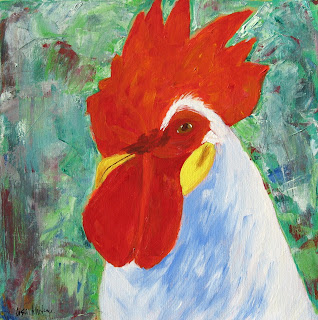 Mr. Doodles
20 x 20 acrylic
I know ya'll sit on pins and needles awaiting my next post, thinking that because it takes me so long to post something, it must be spectacular.    Well, sorry, but I don't think that's really the case.  I try to paint a lot.  My intention was to post a painting once a week (those ambitious Daily Painters blow my mind), but as it turns out it seems it is more like once a month.  Time gets away from me.
Any-hoo - this is the first of so many chickens and roosters, that I'll probably lose your attention.  I love my chickens.  That's all I can say.  I was in tears earlier this week because I was sure Sly Fox (beautiful yet a menace to our flock) had gotten yet another one of our hens.  She was not with the others.  She was not on the porch or in the kitchen where she often comes in the evening to get her treat.  I had resigned myself to life without her.  I took one last look under the house and there she was.  She had gotten in but could not get out.  Luckily the hubs arrived home about then and got the necessary tools out to remove the lattice so she could get out.  Silly girl.
Well, the above painting is. . . . .not her.  This is Mr. Doodles, the lone man, or rooster if you will.  He has only 7 girls to keep track of, and I was pretty disappointed he had lost track of Diana that evening.  He usually does a good job.  It cracks me up that when I throw them snacks (they love vanilla wafers, graham crackers, cheeze-its, and bread), that Doodles will stand over a cracker - even pick it up - and make a bunch of bawking noises to alert the girls.  He always allows them to take the snack from him, sometimes even from his lips. . . . . . beak.
I hope you enjoy Mr. Doodles.  He is actually Mr. Doodles Jr.  I won't tell you exactly what happened to Mr. Doodles Sr.  Let's just say that he became very abusive to his women and had to be dealt with appropriately.  Doodles, Jr. has so far proven to be much less aggressive.  For his sake, let's hope he stays that way.
Stay tuned.  You never know what might happen at Ft. Clucks, but rest assured there is a whole lot of chicken paintin' goin' on.
Posted by Lisa F Rogers at 11:58 AM