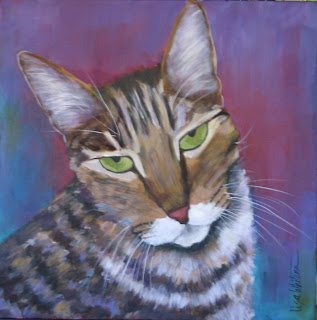 Norm
24" x 24"
Acrylic on gallery wrapped canvas
The wait is over.  The next Norm painting that certainly all of you have been anxiously awaiting is here.  Some of you probably know that my Facebook profile picture is a small 10 x 10 sketch I did of Norm only about a week after he died last year - specifically April 11, 2011.  In celebration of the anniversary of his passing, I just finished a bigger, and I think better, version of the original sketch.
It's hard to believe it has been a year.  We have yet to find a replacement for Norm - not that there is one.  I don't know if we will ever have another Norm; another kitty who keeps putting his paw on you - usually in the middle of the night - until you finally get up to see what he wants.  We would think he was in dire need to go out.  But what did he want?  Someone to watch him eat.  I don't know how many times I can remember saying "Oh.  O.K. Norm.  That's really interesting.  Thank you for getting me up so I can watch you eat."  This entertainment was not provided exclusively to me.  He let my husband watch him eat sometimes too.  Can you imagine the confidence it takes to make someone get up from a comfortable bed. . . in the middle of the night. . . . just to watch you eat?
Eventually, maybe, we will find another Norm, but I doubt it.  Although the following picture is not the greatest, it is the one I worked from for this painting.  Thanks for celebrating Norm's life with me.